The Microsoft founder and philanthropist Bill Gates’ is the fourth richest man in the world with a net worth of $120 billion, according to Forbes. Gates, 64, decided to step down from Microsoft’s board early this year to dedicate more time and efforts to his charitable activities through the Bill & Melinda Gates Foundation.

Founded in 2000, Bill & Melinda Gates Foundation Trust has been seeking to earn money for charitable activities, including education, global health, development, and climate change. In order to generate a sustainable source of money, Bill & Melinda Gates Foundation Trust started investing money in companies that have a long history of returning cash to investors in the form of dividends and steady share price gains.

The world’s renowned investor Warren Buffet is the trustee of Gates foundation and he has pledged the majority of his fortune to the Bill & Melinda Gates Foundation Trust.

Buffett has donated 10 million shares of Berkshire Hathaway (BRK.B) to Gates foundation in 2006, which was then valued at around $31 billion. Since then, Buffett’s Berkshire has been contributing significantly to charitable causes and has lifted the total number of shares to nearly 47 million.

Despite massive stock market volatility this year amid pandemic, the portfolio managers have kept their investment in blue-chip stocks with small changes in the overall portfolio. The time held for top 20 stocks stands around 31.65 quarters while the trust has been holding top 10 stocks 32.30 quarters on average.

In a low-interest-rate environment, defensive investors and retirees have been wondering which stocks to buy. For these returns seekers, it might be a good idea to simply copy Bill Gates stock portfolio? Let’s start examining the top 15 stocks of the Bill Gates’ stock portfolio to gauge whether these stocks have the potential to offer sustainable returns over the long-term.

The media company Grupo Televisa, S.A.B. (NYSE: TV) is one of the permanent members of Bill Gates portfolio. Trust first initiated a position in the media company during the second quarter of 2002.

The media company is the fifteenth largest stock holding of Bill Gates’ stock portfolio, accounting for 0.47% of the portfolio. Shares of Grupo Televisa have been underperforming over the past five years due to changing market trends. Its shares are down almost 70% in the last ten years. Year over year drop in revenues has negatively impacted its share price performance in the past years.

The Chinese e-commerce platform Alibaba Group Holding Limited (NYSE: BABA) is relatively a newcomer in Bill Gates’ stock portfolio. The portfolio manager has created a stake in Alibaba during the first quarter of 2020. The trust has bought 552,383 shares valued at $162 million, accounting for 0.74% of the overall portfolio.

The world’s largest e-commerce platform Amazon (AMZN) is the thirteenth largest stock holding of Bill & Melinda Gates Foundation. The trust has created a skate in Amazon early this year by purchasing 60,460 shares valued at $190 million. The trust benefited from its Amazon stake because shares of the largest e-commerce giant jumped more than 70% year to date.

Hedge funds believe Amazon has more upside potential in the days ahead. Baron Opportunity Fund pointed out Amazon’s growth potential in a letter to shareholders.

Baron Opportunity Fund said: “Amazon.com, Inc. is the world’s largest retailer and cloud services provider. Shares were up on strong second quarter revenue metrics – with paid unit growth accelerating to 57%, a startling figure for a company of this scale – as Amazon benefited from recent investments in logistics and distribution to meet increased COVID-19-related demand. Amazon has the unique ability to deliver all the necessities of life safely to your doorstep, including groceries. Amazon also reported a stunning beat in operating profit, with $5.8 billion of operating income, almost six times Wall Street’s expected figure. While e-commerce penetration is rising rapidly and Amazon continues to grow its addressable market by entering new verticals, we continue to view Amazon Web Services as the more material driver of the company given its leadership in the vast and growing cloud infrastructure market and potential to compete in application software in the years to come.”

The world’s largest technology giant Apple (AAPL) is a member of Bill Gates’ stock portfolio since the beginning of this year. Apple stock holding accounts for 1.05% of the overall portfolio valued at $232 million. Shares of Apple soared almost 70% this year. In addition to share price gains, Apple offers hefty dividends to investors.

Here is what RiverPark Advisors said: “Apple: AAPL shares were a top contributor as the company reported record fiscal third-quarter results, with revenue up 11% to $60 billion and EPS up 18% to $2.58 – both well ahead of expectations. Revenue was driven by double-digit growth in both Products (up 10%) and Services (up 15%), as well as growth in every geographic segment.”

Bill & Melinda Gates Foundation’s stock portfolio reduced its stake in the healthcare company Schrodinger, Inc. (SDGR) during the latest quarter. The trust first initiated a stake in Schrodinger during the first quarter of this year. Despite the 28% shares sales, Schrodinger still accounts for 1.07% of the portfolio.

Baron Health Care Fund thinks Schrödinger is a good stock to buy and hold. Here’s what Baron Health Care Fund said: “Schrodinger, Inc. is a hybrid computer science, physics, and biotechnology company that has an established software suite allowing drug developers to explore the endless range of possible drug/target interactions allowed via the rules governing single atom interactions. Given that Schrodinger was the best performing IPO in the entire biotechnology space in the first six months of 2020, we were not surprised to see some mean reversion in the third quarter. We remain investors for both the established software business and the biotechnology development arm.”

Coca-Cola FEMSA, S.A.B. de C.V (NYSE: KOF) has been a permanent member of Bill Gates’ stock portfolio over the last fifteen years. The trust currently holds 6.2 million shares valued at $253 million, accounting for 1.15% of the overall portfolio. Shares of Coca-Cola FEMSA have been under pressure over the years due to increasing market competition.

Specialty Chemicals Ecolab Inc. (NYSE: ECL) has been a member of Bill & Melinda Gates Foundation stock portfolio over the past ten years. It is the seventh-largest stock holding, according to the latest filings. The investments account for 3.95% of the overall portfolio. Ecolab shares jumped 336% in the last ten years. The company has raised dividends in the past 28 straight years.

We talked about Crown Castle’s business in detail in this article. Here is an excerpt:

Crown offers cell towers under long-term agreements with telecom carriers. A typical tower leases has an initial term of 20 years, which then gets renewed every five years. Those leases cannot be broken easily (perhaps a bankruptcy of a carrier is the only way out from the contractual clauses). There are contractual escalation amounts each year, which ensures growth in profits over time. There is a considerable amount of red tape in establishing a cell site location, and navigating local laws and regulations. Needless to say, it is not easy to set up towers just like that. It would be difficult for a competitor to set up a tower next door.

Companies earn their money by signing up several customers to its towers. The return on investment increases from low single digit percentages for one customer to a double-digit percentage with three or more clients. Therefore, having multiple carriers is good for Crown Castle (CCI).

The risk comes from consolidations with major clients – when the number of potential clients decreases over time, the potential profits are limited. The merger between Sprint and T-Mobile could impact cell tower companies like this one. However, while Sprint and T-Mobile account for a total of 38% of CCI’s revenues, not all is lost since there is overlap in just 5% of CCI’s towers. In other words, the company would most likely lose a little over 5% of revenues if Sprint & T-Mobile were to merge and shut down overlapping sites right away. In reality, sites can be decommissioned but they would still have to pay until the end of the contractual term. The weighted average remaining lease term on that 5% is five to seven years.

The FFO payout has remained around 80% since 2015. The company converted to a REIT in 2014, after which it immediately ramped up its dividend payout. I find it to be sustainable, and well covered from the dependable rent streams under long-term contracts with escalation clauses.

Sat Dec 26 , 2020
(Bloomberg Impression) — At this stage in the usual year, this column would be crammed with all the standard personal economic assistance: max out the contributions to your 401(k) and 529 personal savings programs, incorporate to your overall health savings account, make 12 months-stop charitable donations and make sure to […] 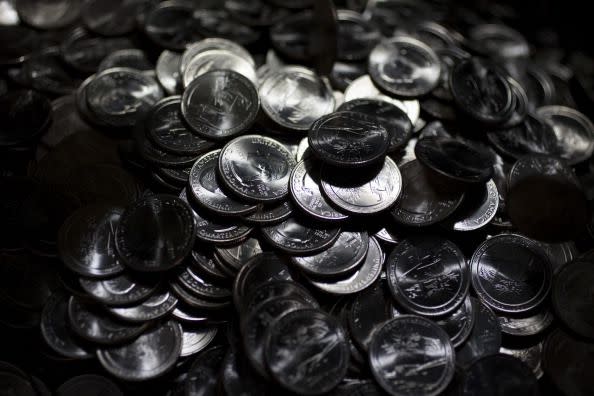