We spent more time than ever in our homes in 2020, which caused many of us to look at them with fresh eyes and think ‘what if’… It’s probably no coincidence that clicks on our property stories rose 30% from last year as you sought out interior inspiration, canny investments and property hotspots while the world went into lockdown.

Here are 10 of this year’s most popular properties (for sale) on The Spaces in 2020.

€1.2m via Italy Sotheby’s International Realty
Was it the scale or the dreamy interiors that piqued your interest in this converted olive oil factory in Sorrento, Italy. Architect Stefano de Martino and interior designer Karen Lohrmann restored the 17th-century mill using a palette of natural materials. They retained its unorthodox and industrial proportions, stripping back rough plastered walls and ceilings while adding doorway-sized windows and modern concrete floors to create a minimalist frame for living. Lohrmann has carefully injected colours that riff on the Italian property’s postcard views of the Faito and Vesuvius mountains – as well as the blue waters of the Gulf of Naples, visible from every room.

The four-bedroom Sorrento property is listed via Italy Sotheby’s International Realty for €1.2m and is still for sale. Re-visit the story here to take a closer look.

CAD 2m Via Colliers Hotels (under offer)
Part novelty-factor, part investment opportunity, The Hockley Motel is the real-life setting of Schitt’s Creek and listed for sale in Ontario this autumn for CAD 2m following the show’s Emmy award-sweep. The Hockley Motel served as the exterior set on the Rose family’s riches-to-rags saga, becoming a pilgrim-spot for many of the show’s loyal fanbase.

The Hockley sits in the small Ontario town of Mono, which is just over an hour’s drive northwest of Toronto. The lot includes the motel (suitably pitched as a fixer-upper, a studio and manager’s apartment) and 6.7 acres of riverfront land.

The Ontario property has also featured in many other television shows, including smash-hit Umbrella Academy, starring Elliot Page, and the 2005 thriller A History of Violence. It could potentially continue to generate revenue as a film location.

While offers of interest closed on the motel on 14 December 2020, it has not yet sold via Colliers Hotels. Fans of the show can peek inside the film location here.

From $47,550
It was just a matter of time until IKEA went from selling flat-pack home furnishing to prefab homes, and 2020 saw the brand unveil its first sustainable off-grid dwelling designed in collaboration with trailer manufacturer Escape.

The IKEA BOHO XL tiny home starts from $47,550 and features customized IKEA interiors that pack a lot of storage and flexible furniture solutions into its dinky 187 sq ft floorplan. The basic nomadic trailer has been souped-up for off-grid living with solar panels, an on-demand water supply and a composting toilet.

£710,000 via The Modern House (sold)
‘Jaw-dropping’ is the word we’d use to describe this next home – a converted dairy barn in the heart of the Suffolk countryside. Dubbed Dairy Row, the agricultural building was converted by UK practice Haverstock. It features a series of double-height spaces, soaring timber beams and exposed Victorian brickwork across its interiors paired with polished concrete and steel. Think rustic – with an industrial twist.

Dairy Row sits on four acres of lush fields and was for sale via The Modern House for £710,000. The Suffolk property has since sold, but there’s still plenty of inspiration for future barn conversions or country houses that can be gleaned in our feature.

$479,000
Not one but three Frank Lloyd houses made our top properties list for 2020, with the maestro’s ‘favourite small house,’ the Goetsch Winckler Residence topping the pile.

The 1,400 sq ft Usonian dwelling was built in 1939 for a pair of professors at Michigan State University, and it’s been lovingly restored by its subsequent owners Dan and Audrey Seidman. Classic Usonian features include clerestory windows, walls of windows, wood panelling and Wright’s favourite red stone flooring. The two-bedroom house sits on a wooded 2-acre plot and was listed in June directly by the Seidmans. It appears to have sold with the listing and website deactivated – but you can still peek inside its pristine interiors in our gallery.

A converted chapel in Venice

POA via Sotheby’s International Realty (sold)
History is imbued into Oratorio chapel’s walls. The Venice property sits between the campo and canal in the city’s Dorsoduro district. The church replaced an earlier San Vio church in the 19th century, incorporating marble from its predecessor as part of its design.

More than a century on, the chapel is now a two-bedroom home decorated with pink marble columns, weathered brickwork and plaster inscriptions from its ecclesiastical past. The converted chapel listed via Venice Sotheby’s International Realty, and as you’d expect, it wasn’t on the market for long before it was snapped up.

$135 via Coldwell Banker (sold)
Long before Frank Lloyd Wright created Fallingwater, the Guggenheim or even his earliest Usonian designs, he was working in the Chicago suburbs and building more traditional houses – albeit with a Japanese twist.

The S A Foster House and Stable was built in 1900 in the city’s West Pullman neighbourhood for attorney Stephen A Foster, and the 2,400 sq ft dwelling draws influence from Japanese pagodas – most apparent in its flared dormers. The Chicago property is heritage-listed and sold for $135,000 via Coldwell Banker.

The Norman Lykes Residence in Nevada

$7.5m via Realtor Deanna Peters
While the other FLW properties on our list have come and gone off the market, desert retreat The Norman Lykes Residence is still for sale. That might be because of its rather hefty price tag: the 1959 Phoenix property is asking for $7.5m.

Architect John Rattenbury completed the circular sun house in 1967 after Frank Lloyd Wright’s passing, and it is prominent as the architect’s last project.

However, the modernist home sold at auction in 2019 for just under $1.7m – a fraction of its current asking price, and it’s unclear whether it had any refurbishments to warrant the value increase. Still, that didn’t stop our readers from clicking on the covetable design, which is among a handful of ‘sun houses’ Lloyd Wright designed for the harsh desert terrain.

$3m via TKK represents
If there was a strong midcentury modern flavour to our ‘most shared’ properties for sale this year, Palm Springs was a particularly coveted destination. And while this next property isn’t for everyone, it had us tickled pink. Salmon pink, to be exact.

California architect Albert Frey and Robson Chambers designed the Carl Haymond Residence in 1964 for a Californian TV and radio station founder. Originally the Palm Springs property was painted a more subdued shade; however, when its current owners renovated the house two years ago, they added its distinctive pink paint job, which pops against the bright blue desert sky. And that’s not the only feature bursting with colour: the three-bedroom home is filled with jewellery-box tones lifted straight out of the 1960s and 70s and is a stylish homage to the era.

Of course, it didn’t stay on the market for long, but there’s always the change it’ll pop up at future Modernism Week festivals.

£5.95m via The Modern House
Last but not least is this heavenly church conversion, for sale in London. Kenmont Gardens chapel combines gothic features and staggering volumes with contemporary design. Interior designer Harriet Holgate transformed the red-brick Victorian church’s interiors, maintaining its ecclesiastical proportions and exposed double-height sanctuary, though repurposed the space a living room and kitchen. Beams and trusses have been painted white to match the pared-back minimalist aesthetic that runs throughout the London property.

If you feel its divine inspiration, Kenmont is still on the market via The Modern House – take a tour of the dramatic address.

A historic oil selling price collapse, with concerns headed into 2021

Wed Dec 30 , 2020
By Stephanie Kelly, Devika Krishna Kumar NEW YORK (Reuters) – This 12 months was like no other for oil rates. FILE Picture: An oil employee walks towards a drill rig soon after placing floor monitoring gear in the vicinity of the underground horizontal drill in Loving County, Texas, U.S., November […] 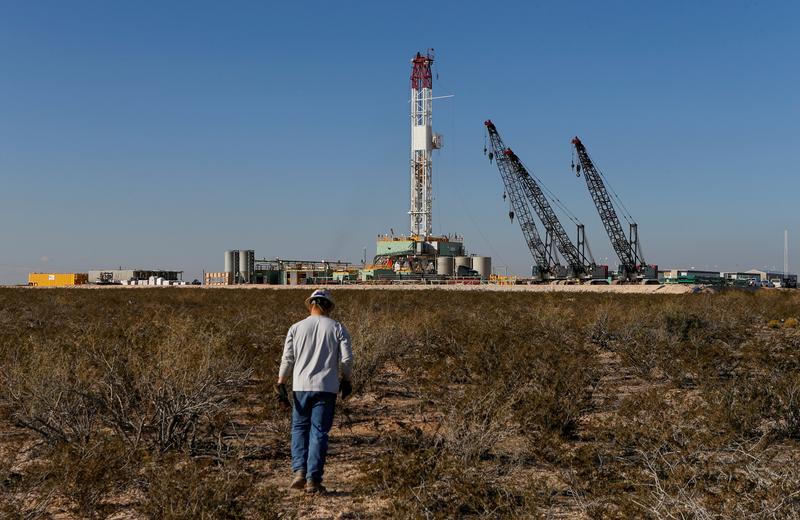