Stimulus was in the news today, but, for the first time in a long time, it wasn’t the news.

With $600 direct payments to Americans green-lit, the House on Monday passed a bill that would upgrade those checks to $2,000. Then on Tuesday, Senate Majority Leader Mitch McConnell blocked Minority Leader Chuck Schumer’s bid to unanimously advance the bill, though he conceded larger checks might eventually be tied to actions on other GOP priorities – namely, Section 230 legal protection for internet platforms and unsubstantiated voter fraud claims.

But the market’s slight losses today didn’t appear tied to McConnell’s announcement, which was widely anticipated. Dan Wantrobski, technical strategist and associate director of research at Janney Montgomery Scott, points out that the markets simply appear ripe for profit-taking:

“U.S. equities in particular are vulnerable to a correction as we enter 2021,” he says, adding that small caps specifically are overbought and could lose some steam as investors return to large caps.

Other action in the stock market today: 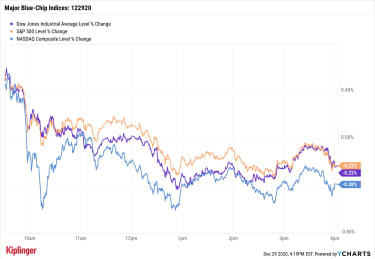 The Best Mutual Funds for Your 401(k)

Yes, 401(k)s don’t leave a lot of room for active management, so it’s easy to set them and forget them – but after the ups and downs of 2020, and given what appears to be a starkly different 2021 market environment compared to this year, your 401(k) could probably use a fresh assessment, and perhaps a few changes.

We’ve spent the past couple months helping investors become more familiar with the most popular 401(k) mutual funds their plans are likely to offer, including providing Buy-Hold-Sell assessments of products from ubiquitous providers such as Vanguard, Fidelity, T. Rowe Price and American Funds.

But if you’re merely interested in the best of the best, regardless of the provider, we’ve got you covered too.

Of the 100 most popular 401(k) funds, only 23 individual actively managed funds (not including target-date series) earned a Buy rating this year. Read on as we outline 2021’s best mutual funds for 401(k) investors, including what it is that puts them above the rest.