Stocks were mixed Wednesday as traders considered lawmakers’ final efforts to get a stimulus package through before year-end, and digested the Federal Open Market Committee’s December monetary policy decision.

The Nasdaq rose to a fresh record close, and the S&P 500 ticked up to end just short of a record closing high. The Dow came under pressure and closed out the session slightly lower. The moves also came after the Commerce Department released a much weaker-than-expected print on November retail sales, which showed a sharper drop in consumer spending than anticipated as new virus-related restrictions came into effect.

Wednesday afternoon, the Federal Open Market Committee included in its statement new language committing to continue its asset purchase program at the current rate “until substantial further progress has been made toward the committee’s maximum employment and price stability goals.” These asset purchases – comprising $80 billion in Treasurys and $40 billion in mortgage-backed securities per month – have been a key tenet of the Fed’s strategy to keep financial markets functioning smoothly during the coronavirus pandemic.

Traders this week have also increased their bets on a stimulus package getting passed in Washington, despite months of disappointment over deadlocked negotiations.

House Speaker Nancy Pelosi, Senate Majority Leader Mitch McConnell, Senate Minority Leader Chuck Schumer, Treasury Secretary Steven Mnuchin and House Minority Leader Kevin McCarthy convened on Tuesday to discuss both the COVID-19 relief package and broader government spending bill, to which the virus relief aid is expected to be attached. The COVID proposal under discussion was split into two earlier this week to cleave off some of the more contentious provisions around aid for state and local governments and liability protections into a separate, smaller bill.

Politico reported Wednesday morning that negotiators were closing in on a relief package that would total $900 billion, or nearly the size of the two bills combined, that would include direct payments to Americans, but exclude the more divisive provisions that have kept lawmakers at a stalemate for months.

“The odds of a fiscal deal before year’s end have been improving,” Goldman Sachs economists led by Jan Hatzius wrote in a note Tuesday. “While we had expected a smaller package to pass now with a larger package waiting until early 2021, it appears increasingly likely that most of this could pass this week. Either way, this is likely to be the last substantial COVID-relief package unless Democrats win both Senate seats in the January 5 runoff elections in Georgia.”

Heading into year-end, the vast majority of strategists have so far struck a bullish tone on equities for 2021. Still, many acknowledged that near-term risks remain, including the ongoing pandemic and the runoff Senate elections in Georgia, given that most investors have already priced in a divided government outcome that would be upended if Republicans end up losing both seats in the state.

“I think that we can get a little bit of consolidation before year-end just due to normal selling at the year-end for rebalancing or tax loss harvesting. Also, depending on where the pulse is for the Senate race in Georgia, investors might want to get ahead of that if they think that capital gains taxes may go up in the future,” Jimmy Lee, The Wealth Consulting Group CEO, told Yahoo Finance on Tuesday. “So that could cause some additional selling before year-end and we could get a little bit of a pullback. But I am very bullish on equities at this point. And I do think we may get a little bit more of a rotation into the economy-opening sectors.”

Texas Attorney General Ken Paxton said on Thursday that he was suing Alphabet-owned Google for anticompetitive conduct in its digital advertising business. States including Arkansas, Idaho, Indiana, Kentucky, Mississippi, Missouri, North Dakota, South Dakota and Utah also joined the lawsuit according to Reuters. Shares of Google were lower by about 0.3% in intraday trading.

The lawsuit is over Google’s alleged “anti-competitive conduct, exclusionary practices and deceptive misrepresentations,” Paxton said in a video statement. “Google repeatedly used its monopolistic power to control pricing, engage in market collusions to rig auctions in a tremendous violation of justice.”

The case marks another major suit brought against Google. It follows the Justice Department’s antitrust lawsuit filed in October over the company’s alleged anticompetitive methods to preserve a monopoly in online search.

This internet Goliath used its power to manipulate the market, destroy competition, and harm YOU, the consumer. Stay tuned… pic.twitter.com/fdEVEWQb0e

The Federal Reserve’s December rate decision included a new commitment to continue its asset purchase program at the current rate “until substantial further progress has been made toward the committee’s maximum employment and price stability goals.” Leading up to this decision, traders had been anticipating that the Fed might offer more guidance on what conditions might lead the central bank to adjust its current, aggressive asset purchase program.

The Fed also included a new Summary of Economic Projections alongside its December monetary policy statement. The median member of the Federal Open Market Committee now expects to see the unemployment rate end 2021 at 5.0%, down from the 5.5% projected in September. The median member also now sees real U.S. GDP to grow by 4.2% in 2021, up from the 4.0% projected in September.

The FOMC’s median projection released Wednesday still calls for interest rates to remain in the target range of 0% to 0.25% at least through year-end 2023. It sees core personal consumption expenditures – its preferred inflation gauge — rising by just 1.8% in 2021 and 1.9% in 2022, with each being just a tick above the 1.7% and 1.8% rates, respectively, the Fed predicted for inflation in September.

Bitcoin crossed the $20,000 threshold for the first time ever on Wednesday, as traders hungry for yield and increasingly bullish on risky assets piled into the cryptocurrency.

As of Wednesday morning, Bitcoin jumped to more than $20,700, according to Yahoo Finance data. This handily passed its peak following an initial 2017 surge. It has nearly tripled so far for the year-to-date.

10:07 a.m. ET: ‘We expect a further decline in spending this month’: What economists are saying about the weakest retail sales report in seven months

“The latest surge in coronavirus infections, which has forced a number of states to re-impose lockdowns, resulted in a worse-than-expected decline in retail sales in November,” Paul Ashworth, chief U.S. economist for Capital Economics, said in a note Wednesday. “With case numbers still trending higher and restrictions getting tighter, we anticipate a further decline in spending this month too.”

“This softness in spending supports our view that fourth-quarter GDP growth will be less than 4% annualized, with the weak hand-off likely to make first-quarter growth even lower,” he added. “The economy will bounce back strongly in the second quarter – as vaccine deployment reaches critical mass, allowing restrictions to be eased – but until then it is going to be a long bleak winter.”

Other economists agreed with the grim near-term assessment.

“This month the consumer stayed at home and spent much less money at the shops and malls as the rapid spread of the coronavirus pandemic across the nation threatens to throw the economy back into recession,” wrote Chris Rupkey, chief financial economist for MUFG Union Bank. “Consumers are two-thirds of the economy, and if they aren’t spending, there won’t be enough growth to create the new employment opportunities that will put the millions and millions of unemployed back to work.”

Activity in the U.S. service and manufacturing sectors each cooled in December, but held in expansionary territory, according to IHS Markit’s preliminary monthly report.

The service sector purchasing managers’ index (PMI) ticked down to 55.3 from 58.4 in November. This marked a sixth straight reading over the neutral level of 50.0, but the lowest reading since June.

The manufacturing sector’s PMI, meanwhile, softened only slightly and fell to 56.5 from 56.7 in November.

“Business reported that the U.S. economy lost growth momentum in December, though encouragingly continued to expand at a solid pace,” Chris Williamson, chief business economist for IHS Markit, said in a statement. “The survey data add to the likelihood of the economy having continued to expand in the fourth quarter, building on the recovery seen in the third quarter.”

“However, while November had seen business buoyed by increased activity around Thanksgiving as well as a surge in business confidence following the presidential election and encouraging vaccine news, December has seen companies rein in their expectations, given the higher virus case numbers and tougher lockdown stances adopted in some states,” he added.

Retail sales dropped 1.1% in November over the previous month, the Commerce Department said Wednesday. This followed a drop of 0.1% in October, which had previously been reported as a rise of 0.3% in the advance print. November’s decline marked only the second drop in the last seven months, and the biggest drop since April’s record virus-induced plunge.

Consensus economists were looking for retail sales to tick down just 0.3% in November, according to Bloomberg data.

By category, department stores posted the sharpest month-over-month drop in sales, with these plunging 7.7%. Food services and drinking places were also hit hard, with sales falling 4%.

Here were the main moves in markets, as of 7:18 a.m. ET Wednesday morning:

Hot Property newsletter: Real estate deals that just made it under the wire

Sun Dec 27 , 2020
What makes a Hot Property? Sometimes it’s the person, other times it’s the place. This last roundup of the year features professional athletes, a home associated with a movie and another where a pop icon once stayed — all closing as we usher 2020 out. Newsletter Inside the homes of […] 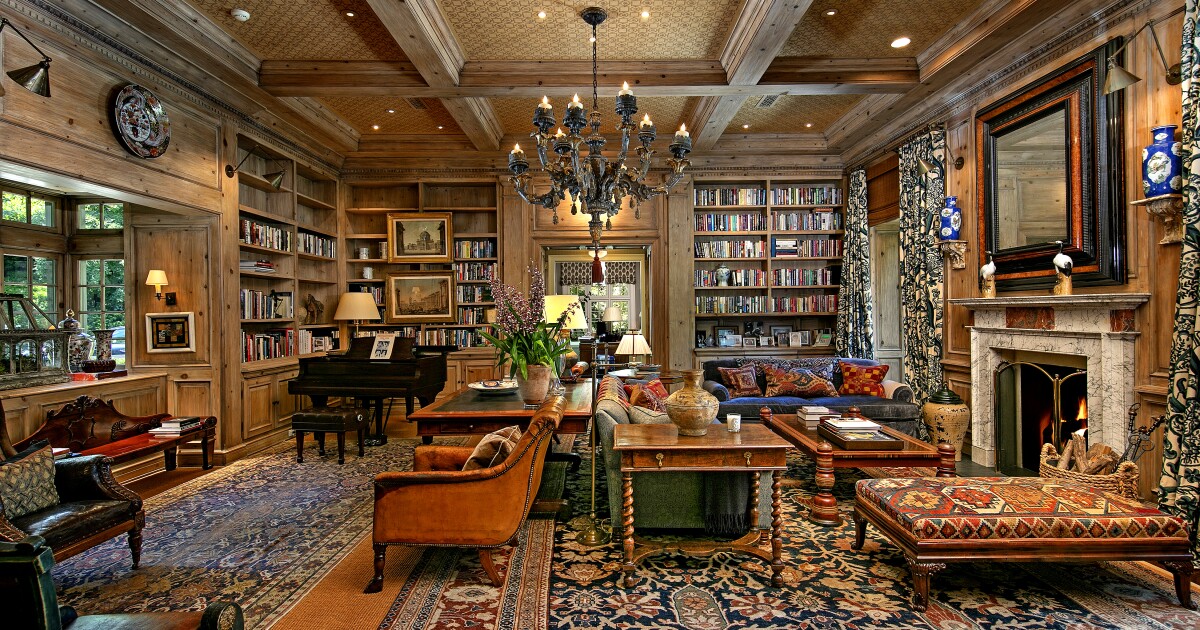