Stocks rose Wednesday, as investors weighed the still-dire pandemic situation against the arrival of more stimulus.

Late Tuesday, however, President Donald Trump suggested he might not sign the $900 billion stimulus deal Congress approved earlier this week, demanding in a video on Twitter that Congress “immediately get rid of the wasteful and unnecessary items” from the bill. He also requested that Congress increase the $600 stimulus payments to Americans to at least $2,000.

Investors also focused on the lingering threat of COVID-19. The Centers for Disease Prevention and Control said that a recent coronavirus mutation identified in the UK could possibly have begun to spread in the U.S. undetected, though a number of new travel restrictions have recently been put in place on Britain. But much remains unknown about the new strain’s virulence and resistance – or lack thereof – to existing COVID-19 vaccines.

States continue to grapple with surges in the virus, with virus-related deaths in New Jersey and Arizona reaching multi-month highs earlier this week, and the populous state of California struggling to contain an ongoing surge. While the vaccine distribution rolls on, businesses and individuals must still contend with the present fall-out from the virus’s spread. The Labor Department released its weekly jobless claims report Wednesday morning, showing another 803,000 individuals filed for first-time unemployment benefits last week, ticking down slightly from last week but holding at a historically elevated level.

A bevy of other economic data reports on durable goods orders, inflation, and personal income and spending also came out Wednesday morning. No government economic data will be released Thursday or Friday in observance of Christmas Eve and Christmas.

And as the year winds down, investors are beginning to turn their attention to 2021. In the very near-term, traders will be closely eyeing the Georgia Senate runoffs at the beginning of January, given that many believe markets have already priced in a divided government outcome, which could be upended in the event that Democratic lawmakers take control of the chamber.

Further out over the course of 2021, many strategists believe the reopening trade, and broadening equity market participation among shares of companies hardest hit by the pandemic, will be a key theme.

“2020 was historically a pretty narrow market. By that I mean very few sectors, and even stocks, performed quite well. And then there was the ‘have-nots’ who really lagged the market,” Matt Peron, director of Janus Henderson Investors, told Yahoo Finance on Tuesday. “So we think that coming into 2021, given the recovery that we expect, you should expect to see that broaden out, and we will see more participation from the broader market.”

The three major indices rose Wednesday afternoon, with less than one hour left in the regular trading day.

Energy stocks outperformed in the S&P 500 alongside the financials and communication services sectors. Goldman Sachs and JPMorgan Chase led gains in the Dow.

Overall, the S&P 500 was set to end a three-session losing streak, as investors shook off virus and stimulus stalemate concerns from earlier this week.

Jefferies equity strategists are sounding an early alarm on the stock market, as a wave of bullishness overtakes investors.

“In almost an exact replay of the end of last year, our risk indicators have begun to flash euphoria with sentiment just a tad too bullish,” strategists led by Sean Darby said in a note Wednesday.

Still, “aside from a crowded short position on the dollar, there are few other catalysts for a correction in share prices,” they added. “Indeed earnings are still being revised up, real interest rates are negative and inflation expectations are perky. The U.S. Georgia State elections are the obvious risk.”

Jefferies cited a number of indicators as pointing to the euphoria, including the fact that the greatest number of S&P 500 stocks are trading above their 200-day moving averages since 2013, and that 89% of small-cap Russell 2000 stocks are trading above their own respective 200-day moving averages. Similar signs of elevated sentiment are showing up in options markets, the analysts added.

Other Wall Street firms including Bank of America and Citi have also recently struck a more cautious tone given increasing indications of euphoria.

10:00 a.m. ET: New home sales plunge by the most since March in November

New home sales sank by the most since March in November as some of the housing market’s recent advances began to moderate.

New home sales were down 11.0%, following a 2.1% decline in October, to reach a seasonally adjusted annual rate of 841,000, according to the Commerce Department. Consensus economists had expected new home sales to tick down only 0.5% to 995,000.

The biggest drop came in new-home sales for the Midwest, which were down more than 43% during the month. Home sales in the West also sank sharply by more than 17%, but fell more mutedly in the Northeast and South.

Orders for manufactured goods intended to last three years or more climbed further in November, underscoring the ongoing rebound in the manufacturing sector.

Durable goods orders increased 0.9% in November after an upwardly revised 1.8% increase in October, the Commerce Department said Wednesday. However, much of the increase came due to defense aircraft and parts orders. Excluding transportation orders, durable goods orders rose 0.4%, or slightly slower than the 0.5% increase anticipated.

Non-defense capital goods orders, excluding aircraft, increased 0.4% in November, or slightly slower than the 0.6% increase consensus economists expected. This metric – which serve as a proxy for business capital expenditure plans, has also risen in every month since April.

8:39 a.m. ET: Personal income falls by the most since August in November, spending drops for the first time since April

Personal income and spending both dropped more than expected in November, as more COVID-19 related restrictions and dwindling benefits weighed on consumers.

Personal income fell 1.1% in November after a 0.6% drop in October, the Commerce Department reported Wednesday. This marked the largest drop in income since August, or the first month after an initial wave of weekly enhanced unemployment benefits expired. Consensus economists were expecting a drop of just 0.3%, according to Bloomberg data.

The personal saving rate, or personal savings as a percentage of disposable income, was 12.9%, or the lowest level since March, and a significant step down from the pandemic-era high of 33.7% in April.

New weekly jobless claims ticked down more than anticipated last week, though rising COVID-19 cases across the country have still kept these coming in at a historically elevated rate.

New claims totaled 803,000, below the upwardly revised 892,000 from the previous week, according to the Labor Department. Consensus economists had expected these claims to come in at 880,000 in the latest report.

New jobless claims have now held above the 800,000 level for three consecutive weeks, following a stretch of nearly two months of new claims below that level. And while new jobless claims have decreased significantly from the pandemic-era high of 6.9 million in March, they are still coming in at about four times the pre-COVID pace of just over 200,000 each week.

Continuing claims unexpectedly declined during the week ended Dec. 12 to 5.337 million, from the 5.507 million reported for the prior week.

Sat Dec 26 , 2020
In his past speech on the Property floor, Rep. Lee Chatfield regularly took an apologetic tone. From the get-go, the 32-calendar year-previous former instructor from Northern Michigan reported his purpose whilst serving as the Speaker of the Residence was to locate bipartisan consensus anywhere probable in a divided government. But […] 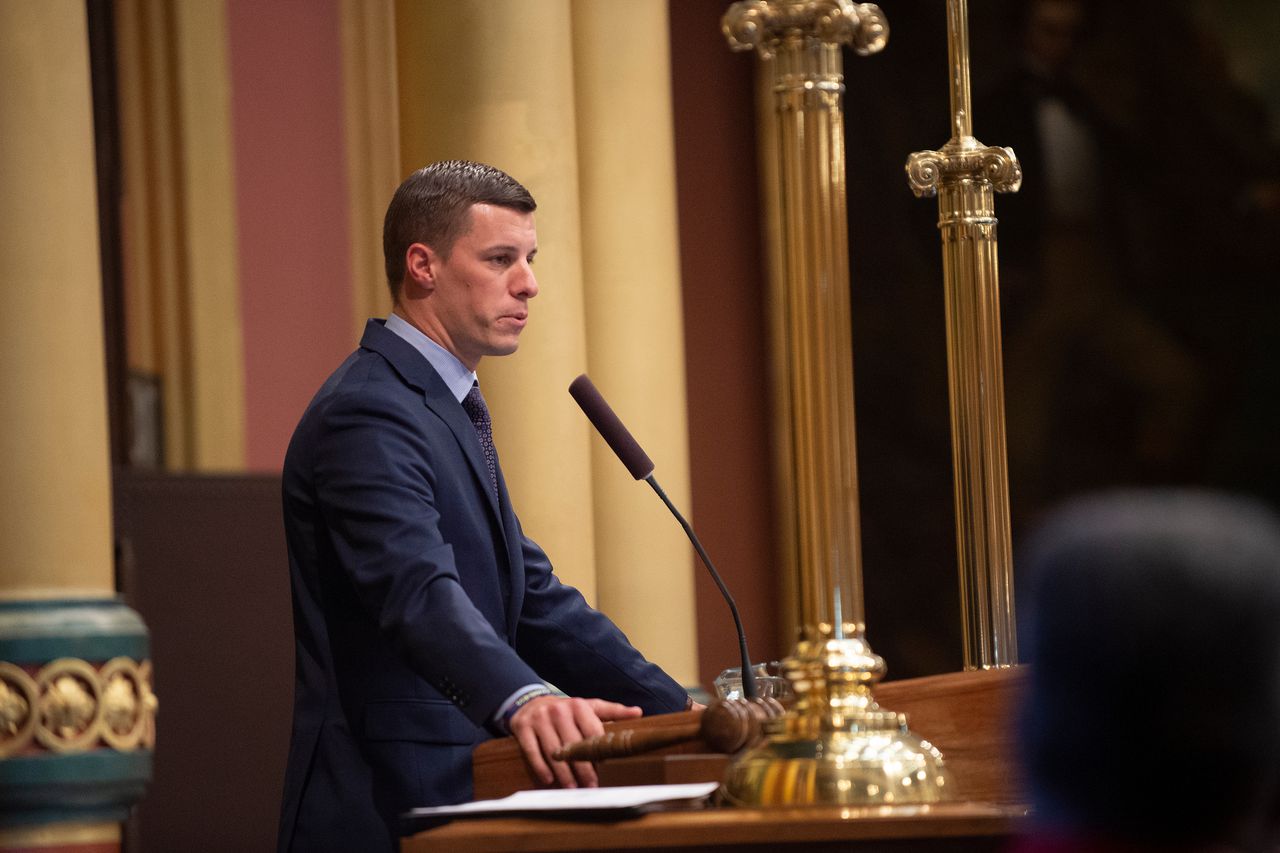