The S&P 500 and Dow slid after hitting record highs earlier on Wednesday as stimulus discussions in Washington appeared to hit more roadblocks. Tech shares underperformed, and the Nasdaq sank.

The rhetoric knocked investor confidence in a near-term deal, which had been stoked earlier after Treasury Secretary Steven Mnuchin said he offered a new $916 billion proposal to Pelosi on Tuesday. He said his plan “includes money for state and local governments and robust liability protections for businesses, schools and universities.” Last week, a bipartisan group of lawmakers had unveiled a stimulus outline worth about $908 billion, which diverged from Mnuchin’s plan on some key issues, including offering $300 per week in augmented unemployment benefits absent from Mnuchin’s proposal.

Meanwhile, Pfizer (PFE) and BioNTech’s (BNTX) COVID-19 vaccine inched closer to approval. The U.S. Food and Drug Administration released data from the companies’ clinical trials on Tuesday, which reaffirmed that the inoculation was effective within approximately 10 days of the first dose, and offered strong protection regardless of a volunteer’s age, weight or race. The FDA is set to convene its panel of outside advisers Thursday, with the group set to vote on whether or not to recommend approval of the vaccine for emergency use authorization shortly thereafter.

Though traders are still awaiting final confirmation that another stimulus package will get done and a vaccine roll-out will go smoothly, many have begun anxiously looking for another catalyst for markets.

“The market is gasping and grasping for some new leadership signal. Vaccines, virus, stimulus, spending are all rather well priced into the market. People have different expectations, but they’re pretty much there as knowns in the marketplace,” George Ball, Sanders Morris Harris CEO, told Yahoo Finance on Tuesday. “I think the next move, especially if you’re a trader, is probably greed. And there’s a greed catalyst out there that I think is very influential.”

Three other factors could push the markets higher as well, he added.

“One is that there’s going to be a good deal of spending, and it’s likely to be in infrastructure first before anything else, but that’s going to be a major economic stimulus for the markets,” he said. “The second factor that isn’t there yet is an intangible, and it is the evidence that President-elect Biden is using unification as his primary theme. Unification is good for psychology.”

“And the third is that people, and particularly the younger ‘do-it-yourselfers,’ the Robinhood traders, are discovering individual equities as a place of interest. Part of it is speculative, part of it is interest, and they’re a bigger and bigger factor in the market and tend to be on the bull side as opposed to the contrary.”

Elsewhere, traders on Wednesday saw the first of two highly valued companies hit the public exchanges. Shares of food delivery company DoorDash began trading on the New York Stock Exchange shortly after 12:30 p.m. ET on Wednesday. Shares opened at $182, after the company priced its initial public offering at $102 per share – above its previously advertised range – to raise nearly $3.4 billion.

Home-sharing software company Airbnb is set to price its initial public offering on Wednesday, and shares will begin trading publicly on the Nasdaq on Thursday.

Shares of DoorDash opened on the New York Stock Exchange at $182 per share on Wednesday for a pop of nearly 80% above its initial public offering pricing of $102 a share.

DoorDash on Tuesday had already raised $3.37 billion in its IPO for the third largest in the U.S. this year, after the IPO of billionaire investor Bill Ackman’s Pershing Square Tontine Holdings, and software company Snowflake’s IPO after over-allotment options were exercised.

The S&P 500 and Dow wiped out earlier gains to trade lower Wednesday before noon, with discussions in Washington hitting yet another roadblock.

The Dow fell about 60 points, or 0.2%, and the S&P 500 fell by about the same margin on a percentage basis. The real estate, utilities and consumer staples sectors led the drop in the blue-chip index, while the consumer discretionary, communication services and industrials sectors held narrowly positive.

Chevron, Salesforce and American Express were the laggards in the Dow, while Goldman Sachs outperformed and gained more than 1.5%.

Based on the first indication, DoorDash shares may open between $125 and $130 per share. The bid and ask prices may still move before the opening trade occurs, however, and more indications are likely to come in. A narrowing spread typically means that the stock is getting close to starting to trade.

The first indication suggested the shares would open well above the $102 per share DoorDash sold its shares for during its initial public offering Tuesday evening.

U.S. job openings unexpectedly rose in October to a three-month high of 6.652 million, up from a revised 6.494 million in September, the Labor Department said in a new report on Wednesday. Consensus economists had been looking for job openings to decline to 6.3 million, based on Bloomberg data.

Job vacancies increased most significantly in health care and social assistance industries, and in state and local government education.

The number of layoffs and discharges, however, increased to 1.68 million in October from 1.44 million in September. This number was pushed higher by the loss of more temporary 2020 Census workers in the federal government.

“There are more opportunities out there and companies appear to be hiring, but the help wanted signs might disappear later in the year as the coronavirus shutdowns in many states has upturned the labor market which is to say caused it to turn down again,” Chris Rupkey, chief business economist for MUFG Union Bank, said in an email Wednesday morning.

Shares of newly public digital pet shop Chewy (CHWY) ticked lower by nearly 1% Wednesday morning even after the company Tuesday night raised its full-year sales forecast and topped third-quarter revenue expectations, as users made more purchases of pet products online during the pandemic. Still, the stock has risen more than 170% for the year to date.

Third-quarter net sales grew 4.8% over the previous quarter to $1.78 billion, and beat estimates for $1.72 billion, according to Bloomberg data. Its loss per share, however, came in wider than anticipated at 8 cents, versus the 4 cents a share expected.

Sat Dec 26 , 2020
WASHINGTON—President-elect Joe Biden intends to nominate a staff of liberal and centrist economic advisers to provide along with planned Treasury Secretary nominee Janet Yellen, people today common with his plans claimed Sunday, as he prepares to confront the economic fallout from the coronavirus pandemic. Mr. Biden has decided on Neera […] 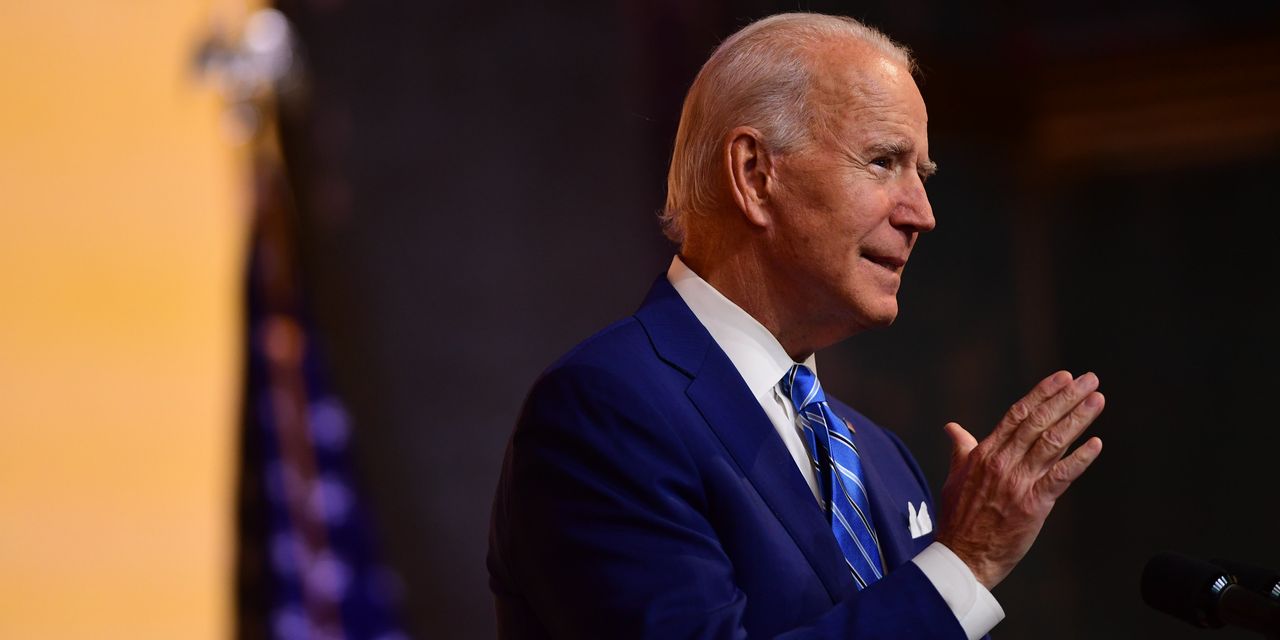