A selloff Monday accelerated as investors continued to weigh fading prospects of a near-term stimulus package, and eyed still-rising coronavirus cases in the U.S.

The Dow slid more than 400 points, or 1.4%, as shares of Johnson & Johnson, Microsoft and Apple lagged. The drop marked the index’s worst since September 23. The communication services and energy sectors underperformed in the S&P 500.

Lawmakers over the weekend delivered remarks that briefly stoked optimism that a last-ditch effort to pass legislation for more virus-relief aid would come about before Election Day on Nov. 3. In comments to reporters in Nevada on Sunday, President Donald Trump said he wanted “a bigger number” than House Speaker Nancy Pelosi has requested, after House Democrats voted to advance a $2.2 trillion package earlier this month. The remarks suggested Trump would back a proposal larger than the $1.8 trillion sum he had last put forward last week.

Pelosi, for her part, set a Tuesday deadline for reaching a stimulus agreement with the Trump administration before the election. She and Treasury Secretary Steven Mnuchin, the key negotiators in working toward a deal, continued with discussions over the weekend, and were poised to speak again on Monday, Treasury spokesperson Monica Crowley said on Twitter. Pelosi’s spokesperson Drew Hammill said that during the weekend talks, “While there was some encouraging news on testing, there remains work to do to ensure there is a comprehensive testing plan that includes contact tracing” and other measures to address the impact on the virus on different communities.

Though lawmakers have continued to engage over stimulus, traders have tempered their hopes that the discussions might generate a substantial virus relief package before the election. And still, the virus situation in the U.S. remains dire. The nation’s new COVID-19 cases came in at more than 57,000 on Saturday, according to Johns Hopkins data. This marked an improvement from the more than 69,000 cases reported on Friday – the highest one-day sum since late July – but also represented a fifth consecutive day that new virus cases topped 50,000. States in the South and Midwest have most recently been the hardest hit by new cases.

The three major indices sold off more sharply in afternoon trading. Here were the main moves in equity markets as of 2:35 p.m. ET:

The three major indices cut gains to trade lower mid-morning on Monday. The Dow declined about 40 points, or 0.14%, with Cisco, Amgen and UnitedHealth Group leading to the downside. Big Tech shares including Netflix and Amazon erased earlier gains, and the latter fell more than 1%.

The CBOE Volatility Index (^VIX) increased, rising more than 3% to over 28 as uncertainty lingered.

Builder confidence in the single-family housing market jumped to a fresh record high in October, according to the National Association of Home Builders/Wells Fargo Housing Market Index Monday morning.

The headline increase increased by two points to 85 in October, topping September’s then-record high of 83. This marked the first back-to-back set of months during which the index surpassed 80.

“Traffic remains high and record-low interest rates are keeping demand strong as the concept of ‘home’ has taken on renewed importance for work, study and other purposes in the COVID era,” NAHB Chairman Chuck Fowke said in a statement.

Still, building affordable homes may prove a challenge in the near-term, “as shortages of lots, labor, lumber and other key building materials are lengthening construction times,” Fowke added.

AMC Entertainment (AMC), the world’s largest theater operator, said Monday it will reopen about a dozen of its locations in New York starting this Friday, mostly upstate and on Long Island.

“As a result of these openings, AMC expects to have approximately 530 of its 600-theatre circuit open and serving guests by the end of October,” the company said. “Beginning Friday, AMC will be serving guests in 44 of the 45 states where it has theaters, and all these AMC locations will abide by all state and local ordinances.”

The announcement comes as rival Cineworld announced earlier this month plans to temporarily close all theaters in the U.S. and Europe indefinitely, with new movie releases largely put off until 2021. Shares of AMC jumped more than 6.5% in early trading.

8:30 a.m. ET: ConocoPhillips announces plan to buy Concho Resources for $9.7 billion, in largest U.S. oil deal since the start of the pandemic

Energy giant ConocoPhillips on Monday announced it had agreed to purchase Concho Resources (CXO), a rival shale-industry company, for $9.7 billion in an all-stock offering, representing the largest U.S. oil deal since the coronavirus pandemic upended the energy market and sent oil prices tumbling. The announcement also confirms a Bloomberg report of a tie-up between the two companies last week.

The terms of the deal value Concho at an about 15% premium to its closing price as of October 13.

The transaction will yield “two best-in-class asset portfolios that create a combined resource base of approximately 23 billion barrels of oil equivalent with a less than $40 per barrel WTI [West Texas Intermediate] cost of supply and an average cost of supply below $30 per barrel WTI,” according to ConocoPhillips’ (COP) statement Monday. The combined companies expect to capture $500 million in annual cost and capital savings by 2022.

The deal represents the latest in the hard-hit oil industry so far this year, following a tough spring that at one point forced the price of oil into negative territory. Last month, Devon Energy agreed to a $2.6 billion tie-up with WPX Energy, and Chevron over the summer agreed to purchase Noble Energy in an all-stock $5 billion transaction.

Asian shares decreased, US futures up right after S&P 500 sinks 3.5%

Sat Oct 31 , 2020
Asian shares declined Thursday and U.S. futures turned better after the S&P 500 slid 3.5% right away for its largest drop because June. The providing in U.S. markets followed broad declines in Europe, where by the French president declared hard measures to gradual the virus’ spread and German officials agreed […] 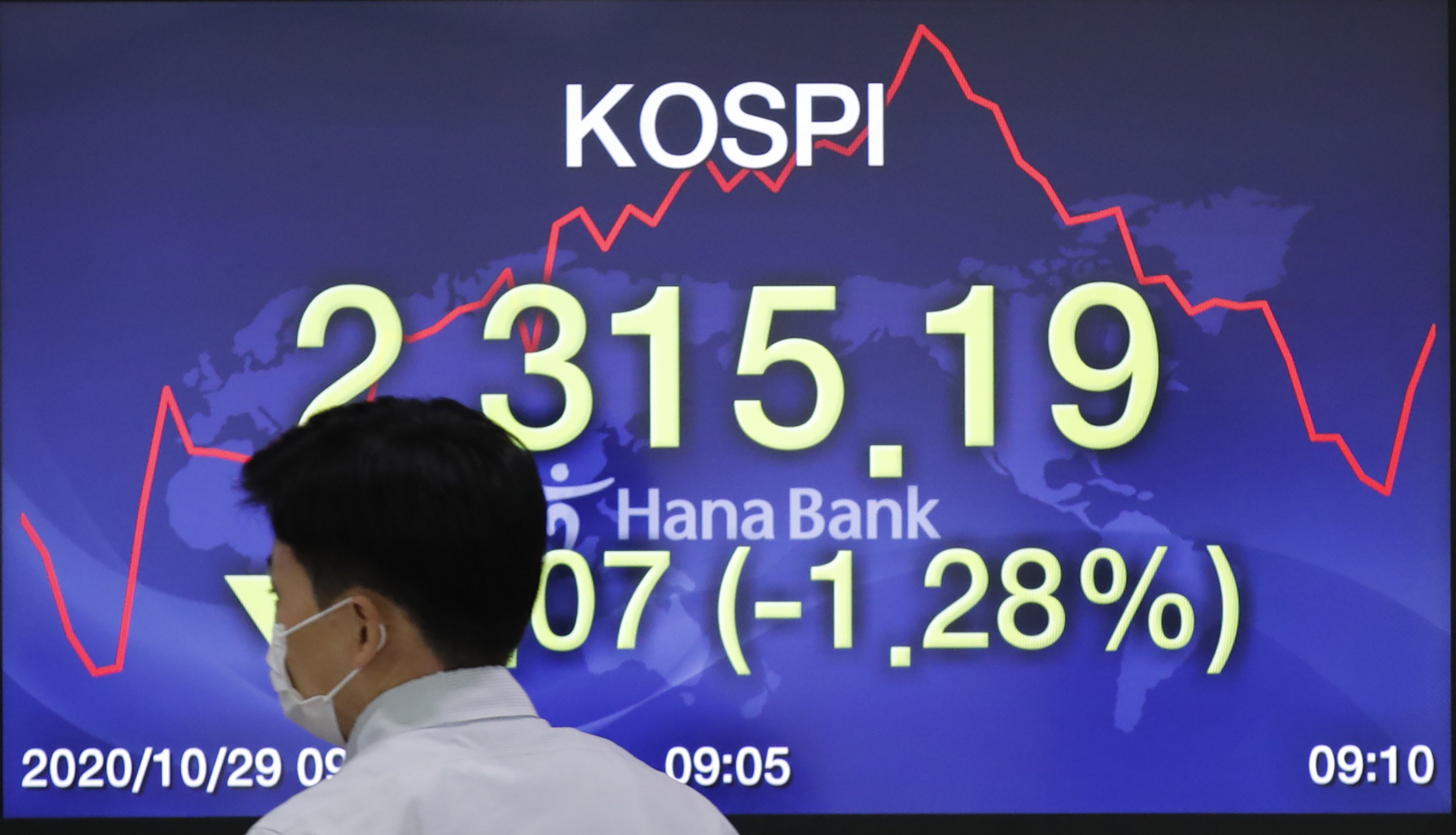